CINTEP’s Recycling Shower is one of 30 Game Changers

Most people love taking a long, hot, steamy shower on a cold day. But it comes at a cost to the environment and your wallet. A person taking a 10-minute shower uses anywhere from 20 to 50 gallons of water, at the use of 2 to 5 gallons per minute.

Australian engineering firm CINTEP has developed a product that cuts that number by more than half. The Water Recycling Shower looks and feels like an ordinary shower, but is able to slash water consumption by 70 per cent. It does this by automatically cleaning, filtering and pasteurizing used water. The shower then recirculates and reuses 70 per cent of that clean water.

Peter Brewin, a British engineer, invented the environmentally-friendly shower in 2004 while he was an industrial-design student at the Royal College of Art in London. The shower functions somewhat like a small-scale water treatment plant in that it continuously captures, cleans, and recirculates 70 per cent of the water used during a shower. Pasteurization—the same method used for heating and purifying milk—because it’s the fastest and most environmentally-friendly way to clean and recirculate the water.

“The main benefits [of pasteurization] are that it requires no chemicals and can be very rapid,” Brewin said. “Because in a recirculating shower you are starting with warm water and you have to heat it anyway it was possible to use a heat exchanger to heat the water to a high enough temperature to achieve pasteurization without a significant additional energy input.”
Nick Christy, the CEO and co-founder of CINTEP with Brewin, explained the step-by-step process of how this shower works. 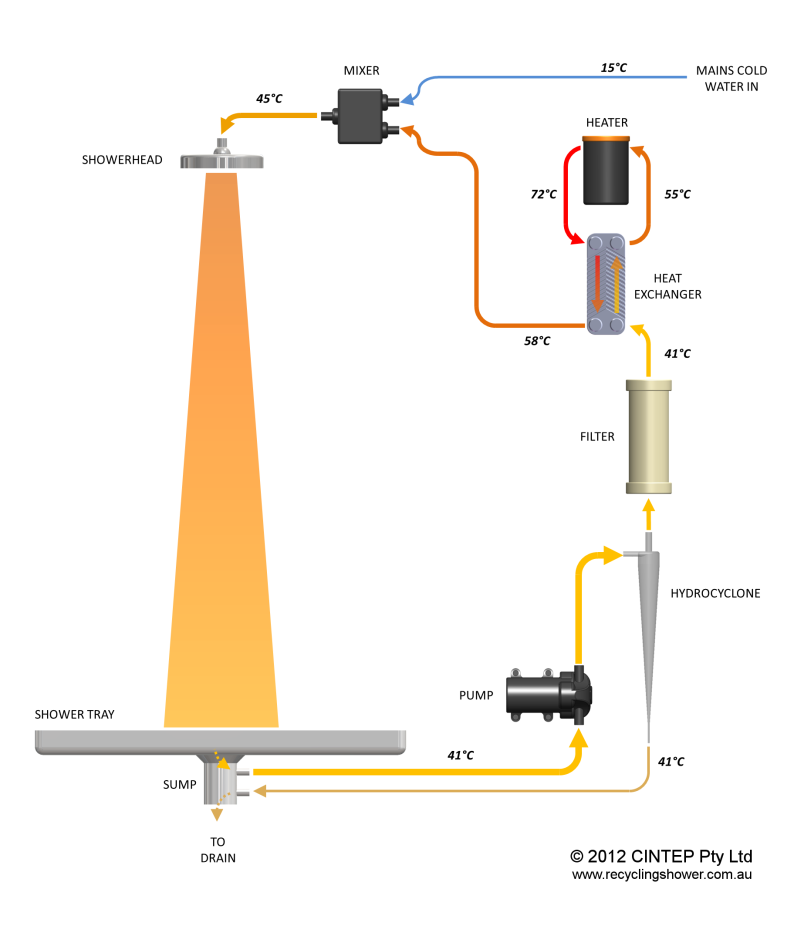 1. Water is pumped from the mains (cold water only, no hot feed necessary), and a non-return valve prevents back flow into the mains.
2. The mains water is then pumped to the mixer, which will adjust the relative cold and hot flows until the mixed flow is at the requested temperature.
3. The water passes through a mesh filter and is pumped from the shower tray to the hydrocyclone.
4. The hydrocyclone removes heavier than water particles from the water and splits the flow so that 30% leaves through the underflow carrying the majority of un-dissolved solids to the drains. The balance of 70%, which is now clean, exits through the top of the hydrocyclone.
5. The clean water is then carried to the carbon filter where it becomes visually clean and chlorine is removed. This filter will require replacement every 6 months.
6. The water is now visually clear and enters a heat exchanger with an efficiency of 90%. The heat exchanger raises the temperature of the water in the inflow to the heater, reducing the energy input required to reach pasteurisation and increasing the efficiency of the shower.
7. The water then enters an electric heater where the temperature rises above 72 degrees Celsius/162 degrees Fahrenheit for 15 seconds. This pasteurizes the water (the same treatment that makes milk safe to drink) and is sufficient to kill almost all biological pathogens.
8. After leaving the heater, the water re-enters the heat exchanger where some of its heat is transferred to the water entering the heater, reducing the temperature of the water in the outflow, which reduces the amount of cold water required to reduce the outflow water temperature for use in the showerhead. The presence of the heat exchanger therefore increases both the energy and water efficiency of the shower.
9. The water then enters the mixer where it is mixed with cold water (approximately 30% of the re-circulated volume) from the mains supply to reduce its temperature to the requested temperature and to replace the volume lost at step 4 from the underflow of the hydrocyclone.
10. After passing through the mixer, the water passes to the showerhead.

The shower recycles 70 per cent of the water it uses. That means that for each liter input to the shower system, it will output 3.3 litres at the showerhead.

Christy explained that when the shower starts, it fills with three litres (.80 gallons) of clean unfiltered water. It then heats and filters that water before you even step foot in the shower, meaning that you won’t have to waste any time waiting for the water to get hot. The shower will then continually re-use 70 per cent of that water. At the end of the shower, it will drain completely before it can restart, meaning that you will never use dirty shower water.

But the shower doesn’t just conserve water. It saves energy too. It uses about 40 to 70 per cent less power than a traditional shower because the system doesn’t have to heat as much water.
“Water has a very high specific heat capacity which means that a huge amount of energy is required to heat cold water for a shower so the energy saving is a very considerable environmental and cost benefit,” Brewin said.

Christy claimed that each person who uses the Water Recycling Shower would take up about about 5,000 to 10,000 fewer gallons of water per year. That means that over the course of a year, a typical household (with a family of four) would save about 20,000 to 40,000 gallons of water.

Popular Science calculated that this would mean that a local water treatment plant would save upwards of 200 kilowatt-hours of energy per household per year.

The shower is currently in the testing phase, but Christy said that he expects the shower to be available for sale in early 2013. CINTEP has not yet set a price for the shower, but Christy claimed that “the shower will pay for itself in 3 to 4 years at current utility prices.”